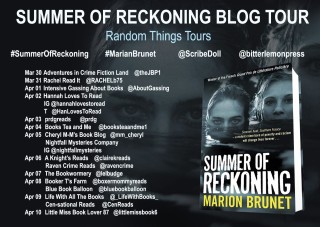 It’s a pleasure to take part in the BlogTour Summer of Reckoning by Marion Brunet, translated by Katherine Gregor.

Marion Brunet, born in 1976 in the Vaucluse, is a well known Young Adult author in France. Her YA novels have received over 30 prizes, including the 2017 UNICEF Prize for Youth Literature. Summer of Reckoning is her first novel written for adults and her first work to be translated into English.

Katherine Gregor lives in London and has recently translated works by Alexander Pushkin from the Russian and plays by Carlo Goldoni and Luigi Pirandello from the Italian.

A psychological thriller set in the Luberon, a touristic French region that evokes holidays in magnificent pool adorned villas. For those who live there year-round, it often means stifling poverty and boredom. Two teenage sisters have grown up in a world where the main distractions are hatred of Arabs and booze. When Celine, 16, discovers she is pregnant and refuses to divulge her lover’s identity, her father embarks on a mission of revenge. A dark and upsetting account of an ailing society, filled with silent and murderous rage.

Brunet uses her tense and efficient novel to tell us a story of “people at sea, on a boat punctured just above the waterline, never far from a shipwreck”. No one describes better the poisonous claustrophobia of families trapped in small rural towns. She writes with a scalpel about couples, family, sexism, racism and poverty.

This reminded me of the teenage exploration of sexuality in Smooth Talk (1985). When young girls float between childhood innocence and the magnetic pull of sexual exploration. No one story is alike, and yet in a way they are all the same.

When a father discovers his teenage daughter Celine is pregnant it sets off a series of events that, although destructive in nature they are also don’t leave much of an impact. That in itself speaks to the nature of what the author wants to portray. The absolute miniature cosmos of village or small-town rural life. The way life stagnates and threatens to suffocate those who are still in the throes of discovery and development, as opposed to those who have already resigned themselves to the stagnation.

The two sisters, Jo and Celine find themselves taking different paths. Celine has begun a road well-worn and travelled by others, whereas Jo still has the aspiration to reach beyond what others say she can reach for.

It’s literary fiction, a slow exploration of violence, birth, sexuality and a crime that slips into obscurity.

It’s fascinating how Brunet captures the differentiation of domestic and other violence. The way both perpetrator and victim perceive it as normal, ergo not worth mentioning or trying to stop. An acknowledgment that society will be just as reluctant to do so. In contradiction the violence during the crime is seen as necessary against a growing evil. One act weighs upon the conscience – the other is not worth another thought.

Brunet is also astute when it comes to the impact of false information fueled by racism, which in turn leads to misconceptions about fellow countrymen, who then become victims of vicious propaganda.

It’s a Kodak moment novel. A study of rural life, of poverty, racism and family.

Buy Summer of Reckoning at Amazon Uk or go to Goodreads for any other retailer. Publisher: Bitter Lemon Press; pub date 12 March 2020. Buy at Amazon com.

One thought on “#BlogTour Summer of Reckoning by Marion Brunet”