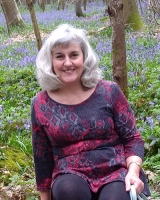 Helen J. Christmas lives on the south coast with her husband. With a love of writing since childhood, she wrote her decade spanning thriller series, Same Face Different Place, Between 2011 and 2017. This five-book mystery suspense series explores British culture and social history from the 70s to the 90s. Inspired by the Bronte sisters in 2016, Helen decided she wanted to develop her writing skills by compiling a book of character-driven short stories. In 2018 she completed Rosebrook Chronicles (The Hidden Stories), a unique novel which gives extra background information to her series.

The 16th Century cottage in which Helen lives with her husband (restored in 1991) provides endless inspiration for writing, something she fits around her family and social life. Helen is a self employed web designer and works from home with her husband, Peter, and she enjoys blogging, country walks, photography and cookery.

London 1960. Robin is hypnotised by a dazzling moon and it sets him on a quest to seek a better life. Fearful of his future, he puts his trust in the wrong person, clueless of the trap he is falling into.

Dublin 1968. Two Irish orphans are separated by the Church. Six year old Bess panics at the thought of being sent to London. An English family want to adopt her but if only it didn’t mean abandoning her elder brother…

Peter meanwhile, has never forgotten her. Fighting to survive in a brutal orphanage, he risks a dangerous escape to reach the mainland and with the law on his tail, he heads for the Capital to find her.

It is not until the 1970s, the lives of the characters intersect. Struggling to cope in a harsh world, how do their experiences shape them into the adults they become and who among them will be believed?

One politician vows to introduce reforms to protect children. But when his only son is bullied at school, alleged to have committed suicide, he knows there is a lot more tunnelling to do if he is to unearth the evil embedded in society.

With snippets of social history from the 70s to the 90s, this book explores the hidden lives of three ordinary citizens.

These victims never had a voice. I wrote this book in order to give them one.

The hidden stories are exactly that, the untold stories of teenagers who have fallen prey to a society that turned their back on them. Now as adults they have to navigate the repercussions of their trauma and try to reconnect bonds that were torn apart.

In essence these stories are about the children and young people who fall into the black holes of an inadequate system. Inadequate due to the job stopping at the door, children being counted as statistics rather than human beings, and all of them having no real voice. That’s what their representatives are for, to give them a voice, and yet sadly that doesn’t seem to be case in the majority of cases.

Looking back on these same issues in the pre Children’s Act era and before specific legislation was put into place to try and cover every way to keep children safe, well it was a chaotic system with plenty of victims. For every children’s home, orphanage or church related crime against children that have been revealed there are many more that remain unspoken.

Saying all that, the author wants us to hear those silenced voices, but what this story is really about is what happens after the abuse. How does the child or young person deal with the aftermath, the psychological and physical scars? How are their lives defined by those moments of fear, pain, blame and the memories?

It’s an emotional and heart-wrenching contemporary read. It’s important to give voices to the silent, perhaps more so because the trauma becomes magnified when the silence goes beyond what is healthy for that individual. Kudos to Christmas for that.

Buy Rosebrook Chronicles The Hidden Stories at Amazon Uk or go to Goodreads for any other retailer. Buy at Amazon com.

*Terms and Conditions –UK entries welcome.  Please enter using the Rafflecopter box below.  The winner will be selected at random via Rafflecopter from all valid entries and will be notified by Twitter and/or email. If no response is received within 7 days then Rachel’s Random Resources reserves the right to select an alternative winner. Open to all entrants aged 18 or over.  Any personal data given as part of the competition entry is used for this purpose only and will not be shared with third parties, with the exception of the winners’ information. This will passed to the giveaway organiser and used only for fulfilment of the prize, after which time Rachel’s Random Resources will delete the data.  I am not responsible for despatch or delivery of the prize.*