Today it’s my turn on the BlogTour Winter’s Gift by Florence Keeling.

Florence Keeling adopted for her pen-name her Great Grandmother’s name, chosen because of the shared birthday of April Fool’s Day.  She is married with two teenage children.  Born and raised in Coventry, England she now lives just outside in Nuneaton.  Reflected Destinies is her first novel.

Florence Keeling also writes for children under the name of Lily Mae Walters.

Bea Winters is in desperate need of a fresh start. Being bullied at work is not her idea of fun and she longs to follow her dream of becoming a published author. When an advert appears in her local paper to work in a publishing house in the sleepy village of Bloomsdale, it sounds too good to be true.

She strikes up an instant friendship with gorgeous aspiring author, Eddie Richards and her dashing millionaire boss Scott Summers. But all isn’t as it seems in the sleepy village of Bloomsdale.

How does the local clairvoyant know her name? Who does the little black dog that keeps appearing belong to and why does she keep bumping into the mysterious Charlie?

As she starts to unravel the truth, it seems that everyone in Bea’s life is keeping secrets.

Bea finds life a little tedious at the moment. At work she is being systematically mobbed and her dreams of being an author are going to remain a dream. Unbeknownst to Bea her luck is about to change for the better if she will let it.

The stars seem to be aligning for her, whether she wants them to or not. She gets an interview at a small publishing house in a rural area and decides to try her luck. Perhaps she can use the experience to gain a foothold in the industry and finally get her work published.

The small village of Bloomsdale comes with a good portion of handsome men, quirky characters and something odd Bea just can’t put her finger on. The local alleged clairvoyant knows things she couldn’t possibly know and this small dog keeps turning up everywhere Bea is.

It’s a feel good story with romance and magical realism.

Although there are moments of drama and discord, in general this is a light-hearted read. Keeling infuses this story with the same kind of magical realism as her Lily Mae Walters stories. She combines the serious with laughter and the tough moments with a lot of hope. At the same time she delivers a story with a bit of mystery and perhaps even a teensy bit of magic. 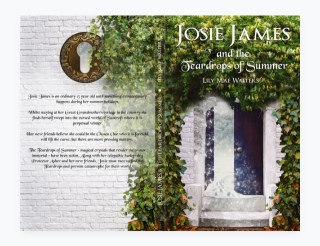 Lily Mae Walters chose her pen name in honour of her beloved grandparents who also stare in the Josie James series. She is married with two teenage children, and two huskies that are the inspiration behind Murphy and Asher in the books.

Lily Mae lives in Nuneaton, England and finds herself using local  places and even her old school in her stories. Family and friends mean the world to Lily Mae and many will find themselves popping up throughout the series.

Lily Mae also writes for adults under the name of Florence Keeling.

Buy Josie James and the Teardrops of Summer

Josie James is an ordinary 13 year old until something extraordinary happens during her summer holidays.Whilst staying at her Great Grandmother’s cottage in the country she finds herself swept into the cursed world of Suncroft where it is perpetual winter. Her new friends believe she could be the Chosen One who it is foretold will lift the curse, but there are more pressing matters.

The Teardrops of Summer – magical crystals that render the owner immortal – have been stolen. Along with her telepathic husky-dog Protector Asher and her new friends, Josie must race to find the Teardrops and prevent catastrophe for their world.

This is the first in a series of books following Josie, as she discovers her real heritage and experiences adventures starting at the age of thirteen. It’s a book for readers aged nine and upwards I would say, and younger if they are advanced readers.

Josie is quickly approaching her thirteenth birthday, which is unbeknownst to her a very important one. One which will open doors into a part of her future she could never have imagined. The shy often insecure young girl becomes the main character in a legacy of light and darkness, as she is thrust into a mystery filled with many surprises. One of the more pleasant surprises being a rather talkative furry ball of valour.

It’s a mixture of fantasy, adventure and mystery with a colourful cast of characters and plenty of potential. The author can take this anywhere, especially because Josie can wander between two very different worlds.

I felt at times that there were a few leaps or gaps, which could have been ironed out to give it a less disjointed feel. Younger readers are much more used to being confronted with complex plots these days, but simple and easy means a bigger audience. There is also the whole oppressive Handmaid’s Talesque nature of the hidden world. Although Josie does make the occasional comment about how sexist the rules are, and how oppressive the world of Suncroft is for girls and women, I hope it is something the author comes back to in future books. Josie fights for equality, whilst hunting down nefarious magical fiends perhaps.

Walters caters to the readers who like to lose themselves in worlds within worlds and the promise of secret gardens hidden behind invisible doors. It is written for younger readers, but will probably appeal to older readers too. I look forward to seeing what Josie gets up to next as she navigates  the worlds she straddles, and in time I hope she will learn to love herself and her beautiful hair.

Buy Josie James and the Teardrops of Summer at Amazon Uk or go to Goodreads for any other retailer. Publisher: Crimson Cloak Publishing

a Rafflecopter giveaway *Terms and Conditions – UK entries only.  Please enter using the Rafflecopter box above. The winner will be selected at random via Rafflecopter from all valid entries and will be notified by Twitter and/or email. If no response is received within 7 days then I reserve the right to select an alternative winner. Open to all entrants aged 18 or over.  Any personal data given as part of the competition entry is used for this purpose only and will not be shared with third parties, with the exception of the winners’ information. This will passed to the giveaway organiser and used only for fulfilment of the prize, after which time I will delete the data.  I am not responsible for despatch or delivery of the prize.*