Today it’s my pleasure to host the Spotlight Tour for The Dark Beneath the Ice by Amelinda Bérubé. Enjoy this subtle psychological venture into the pyche of a teenager, all under the guise of a ghostly story. Enter the Giveaway below to win 2 Copies of Dark Beneath the Ice (US & CANADA ONLY).

Amelinda Bérubé has been a writer and editor with a small department in the Canadian public service. She holds a bachelor of humanities from Carleton University and a master of arts from McGill. Amelinda is also a member of the Society of Children’s Book Writers and Illustrators.

Black Swan meets Paranormal Activity in this compelling ghost story about a former dancer whose grip on reality slips when she begins to think a dark entity is stalking her.

Something is wrong with Marianne.

It’s not just that her parents have finally split up. Or that life hasn’t been the same since she quit dancing. Or even that her mother has checked herself into the hospital.

She’s losing time. Doing things she would never do. And objects around her seem to break whenever she comes close. Something is after her. And the only one who seems to believe her is the daughter of a local psychic.

But their first attempt at an exorcism calls down the full force of the thing’s rage. It demands Marianne give back what she stole. Whatever is haunting her, it wants everything she has—everything it’s convinced she stole. Marianne must uncover the truth that lies beneath it all before the nightmare can take what it thinks it’s owed, leaving Marianne trapped in the darkness of the other side. 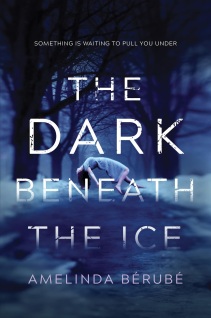 Although this is a YA with a flair of the paranormal, I do think how a reader experiences the read depends on the perspective you have on the story. If you completely eliminate the paranormal and ghostly element of the story ask yourself what you’re left with. You are left with the internal emotional turmoil of a teenager, which manifests itself in physical reactions, blackouts and auditory hallucinations.

The stress of feeling inadequate and not being able to live up to expectations in regards to her dancing. The fear of being rejected for her sexuality and not feeling as if she can be true to her inner desires, and the distress of being a pawn in the middle of a battle between her mother and father. All of those things throw Marianne into a tailspin and threaten to completely destroy her sanity.

Bérubé takes all of those elements and covers them with thin dark veil of a dangerous paranormal presence. Something waiting to consume Marianne when she lets her guard down. To drag her under the icy water and take the life she knows away from her.

Marianne and her new friend Ron set out to discover who or what is threatening both of them, and unfortunately they underestimate the power behind the mysterious presence. The truth is something neither of them can really comprehend.

It’s a tale of teenage distress, pain and fear. When you take the simple paranormal structure away – what remains is a heartbreaking story of a breakdown and a cry for help, albeit a subconscious one. The author writes it in a very lyrical and haunting way. The dark presence haunts, taunts and scares the girl, and ultimately tries to destroy her. It’s a fascinating combination of a psychological premise combined with a paranormal flair. It’s understated and yet extremely powerful at the same time.

Buy Dark Beneath the Ice at Amazon Uk or go to Goodreads for any other retailer.