Today is my turn on the BlogTour Queen of Volts by Amanda Foody. It is the third and final part in the Shadow Game series.

Amanda Foody has always considered imagination to be our best attempt at magic. After a double life as an accountant preparing taxes for multinational corporations, she now spends her free time brewing and fermenting foods much more easily obtained at her local grocery store. She lives in Boston, MA with a hoard of books guarded by the most vicious of feline companions, Jelly Bean.

She is the author of The Shadow Game series and more. Her middle grade debut, Wilderlore: The Accidental Apprentice, hits shelves March 30, 2021, and All of US Villains, co-written with Christine Lynn Herman, releases in September 2021.

Return to the City of Sin, where the final game is about to begin…and winning will demand the ultimate sacrifice.

Only days after a corrupt election and brutal street war, one last bloodthirsty game has begun. The players? The twenty-two most powerful, notorious people in New Reynes.

After realizing they have no choice but to play, Enne Scordata and Levi Glaisyer are desperate to forge new alliances and bargain for their safety. But while Levi offers false smiles and an even falser peace to the city’s politicians, Enne must face a world where her true Mizer identity has been revealed…and any misstep could turn deadly.

Meanwhile, a far more dangerous opponent has appeared on the board, one plucked right from the most gruesome legends of New Reynes. As the game takes its final, vicious turn, Levi and Enne must decide once and for all whether to be partners or enemies.

Because in a game for survival, there are only losers…and monsters.

This is the third book in The Shadow Game series and also unfortunately the conclusion to this fantastic Young Adult fantasy trilogy. I would absolutely recommend reading the other two in the series just to get the whole gist of it and experience the pleasure of the entire story.

It was interesting and also important given the age group this is marketed to for the author to take the time to insert scenes with certain characters engaging in discussions about toxic relationships. You can love each other till the cows come home or be attracted to each other like a bee to pollen, but when your relationship is toxic you eventually have to realise that being apart is sometimes the best for both of you. Looking at you Enne and Levi, and Bryce and Henry. When the toxicity becomes abusive, which it is because Bryce is a lost soul with a lack of compassion – Henry needs to just find the strength to sever those really tight ties.

The Shadow Game takes on an even sinister feel, and every time the players think they have played and won – there is actually no winning when it comes to this game, just saying – then a knife is twisted and the cards are reshuffled once more.

A few pages in I remembered why I love this series so much, and why I need to go back and re-read the first two in the series. I absolutely adore the complexity of this plot, the writing, the world-building, the depth of the characters and just in general the story overall. Also the way Foody took the opportunity to address certain tropes in the Young Adult genre.

This has a bit of a Caraval vibe and is most certainly one of those series that has slipped under the radar a little bit – underrated. Foody needs to be right up there with the best. Not quite sure why her talent for storytelling, weaving a plot and writing doesn’t get the recognition it deserves. I’m hoping this isn’t her last venture into this genre, perhaps an off-shoot of this series or a step up beyond young adult. Either way she is an author to keep an eye on.

Buy Queen of Volts (The Shadow Game #3) at Amazon Uk or go to Goodreads for any other retailer. Publisher: HQ Young Adult; pub date 1 Sept. 2020. Buy at Amazon com. Buy at Waterstones. 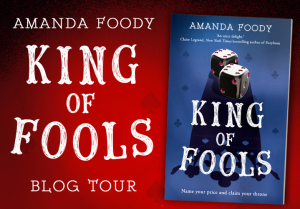 Today it’s my pleasure to take part in the BlogTour King of Fools by Amanda Foody. It’s a complex combination of dystopian meets fantasy, which is enhanced tenfold by the excellent world-building. 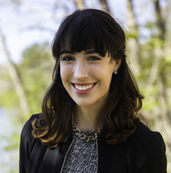 Amanda Foody has always considered imagination to be our best attempt at magic. After spending her childhood longing to attend Hogwarts, she now loves to write about immersive settings and characters grappling with insurmountable destinies. She holds a Masters in Accountancy from Villanova University, and a Bachelors of Arts in English Literature from the College of William and Mary. Currently, she works as a tax accountant in Philadelphia, PA, surrounded by her many siblings and many books.

Daughter of the Burning City was her first novel. Her second, Ace Of Shades was released in April 2018. The second book of The Shadow Game, King of Fools, was released 2nd May 2019 and the third in the trilogy will be released in 2020.

Indulge your vices in the City of Sin, where a sinister street war is brewing and fame is the deadliest killer of them all…

On the quest to find her missing mother, prim and proper Enne Salta became reluctant allies with Levi Glaisyer, the city’s most famous con man. Saving his life in the Shadow Game forced Enne to assume the identity of Seance, a mysterious underworld figure. Now, with the Chancellor of the Republic dead and bounties on both their heads, she and Levi must play a dangerous game of crime and politics…with the very fate of New Reynes at stake.

Thirsting for his freedom and the chance to build an empire, Levi enters an unlikely partnership with Vianca Augustine’s estranged son. Meanwhile, Enne remains trapped by the mafia donna’s binding oath, playing the roles of both darling lady and cunning street lord, unsure which side of herself reflects the truth.

As Enne and Levi walk a path of unimaginable wealth and opportunity, new relationships and deadly secrets could quickly lead them into ruin. And when unforeseen players enter the game, they must each make an impossible choice: To sacrifice everything they’ve earned in order to survive… 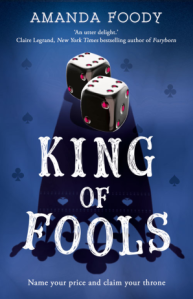 I highly recommend reading the first in this series, Ace of Shades. You don’t need to read it to get the gist of this one, which can be read as a standalone novel, but you are missing out on a cracking read.

Once again I can only commend Foody for creating such a complex combination of dystopian meets fantasy, which is enhanced tenfold by the excellent world-building. The characters have plenty of depth, perhaps even more so than in book one, if that is even possible.

This time the reader follows three characters or rather we get three different perspectives, of Jac, Enne and Levi, and the situations they each have to deal with. They grow individually as people and work towards their own goals, whereas previously there was more collusion between them. Having to accept certain realities about their existence and the world they live in forces maturity upon them. I think as the stakes in the game grow higher the more inclined they are to secure their own survival.

As I have said previously the whole gangs and gangland aspect of the premise reminded me of Locke Lamora, but with more of an urban fantasy vibe. This time there was a focus on political intrigue and power plays, again very different from the first book, which was all about identity and discovery of self.

I will remain purposely slightly unclear about the exact story-lines, because I think it is one of those reads that works better if you go into it without too much detail. Better to savour the intricate story-telling. What I found quite remarkable is how Foody not only managed to take things up a notch, she also took a different approach to the premise. I bet the next book is going to boggle minds. The exuberance and power of this read is palpable.

I am looking forward to reading the third book, which is due in 2020. I am genuinely intrigued as to where Foody is going to take this series next..

Buy King of Fools (The Shadow Game#2) at Amazon Uk or go to Goodreads for any other retailer. Publisher: HQ Young Adult; pub date 2 May 2019. Buy at Amazon com.

Read my review of Ace of Shades by Amanda Foody. 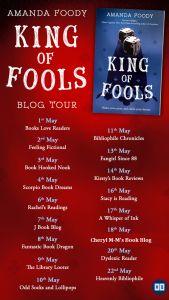