Today it’s a pleasure to take part in the BlogTour A Fatal Truth by Faith Martin – it’s the fifth book in the popular Ryder and Loveday series.

Faith Martin is an English author who was born in Oxford. She lives in an Oxfordshire village. She is best known for her popular detective series, starring Detective Inspector (DI) Hillary Greene. She began her writing career as Maxine Barry. She also writes under the pen names, Joyce Cato and Jessie Daniels

Faith Martin has been writing for 30 years. She signed a massive book deal with the publishers Harper Collins/HQ, who have published her Ryder & Loveday novels. All four novels, A Fatal Obsession, A Fatal Mistake, A Fatal Flaw, A Fatal Secret and A Fatal Truth are available now. 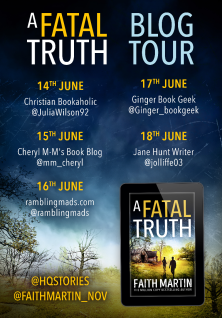 As the Hughes family celebrate bonfire night, a terrible accident leaves the garden shed in flames – and father and grandfather Thomas trapped inside.

Tragic though it is, Thomas’s death passes without suspicion – until a local journalist makes accusations of a police cover-up in the press. WPC Trudy Loveday is sent to investigate, and asks coroner Clement Ryder to help.

But the more questions the two ask the less clear the case seems. There’s no evidence of foul play, and yet the dead man’s family are obviously hiding something. Then there are Thomas’s dubious business practices – was someone out for revenge?

This is the fifth book in the Loveday and Ryder series. All of the books can be read as standalone novels, but I would recommend reading the others just because they are a good read.

The death of grandfather Thomas at a family gathering is a tragedy. Not only did the patriarch die in a terrible way, his entire family was there to see it happen. Traumatic and devastating, or is it? A journalist seems to think there might be more to the story than just unfortunate circumstances, which then leads to Loveday being drawn in to investigate the accident.

It’s a crime series with a cosy feel, which often deals with difficult relevant topics, but the charm of the sleuthing duo balances the more severe moments.

This series has grown on me. It has a young Prime Suspect 1973 Tennison feel to it. The combination of Loveday the policewoman still cutting her teeth and facing the barriers of gender inequality and sexism in her job, and the long years of expertise of Ryder and the way he becomes a kind of father figure to her, is what makes this duo one to watch.

Martin really knows how to make her main characters gel with the readers and the plot. The insecurity of both shows itself in different ways and yet in a way that gives the two the ability to support and help the other. It’s a charming series with plenty of potential.

Buy A Fatal Truth at Amazon Uk or go to Goodreads for any other retailer. Publisher: HQ Digital; pub date 11 Jun. 2020. Buy at Amazon com. Buy at Waterstones.