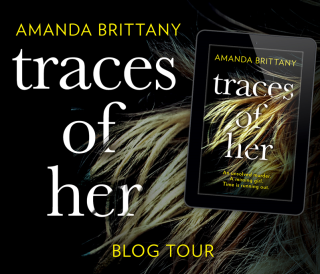 Today it’s a pleasure to take part in the BlogTour for Traces of Her by Amanda Brittany.

Amanda Brittany lives in Hertfordshire with her husband and two dogs. When she’s not writing, she loves spending time with family, travelling, walking, reading & sunny days. She loves travelling, and visiting Abisko in Sweden inspired her to write ‘Her Last Lie’.

She began writing fiction nine years ago, and has since gained a BA in Literature, a Diploma in Creative Writing, and has had 200 stories and articles published in magazines globally.

When her younger sister became terminally ill, Amanda’s hope was to write a novel where her royalties went to Cancer Research. ‘Her Last Lie’ was that book and her debut novel, it reached the Kindle top 100 in the US and Australia and was a #1 Bestseller in the UK. All her eBook royalties for HER LAST LIE are being donated to Cancer Research UK, in memory of her sister who lost her battle with cancer in July 2017. It has so far raised almost £7,000.

Her third novel Traces of Her is due to be published on the 25th October 2019.

Rose isn’t surprised anymore when her free-spirited step-sister, Willow, decides to disappear off somewhere without notice. But something feels different this time. When Willow sends her a mysterious package containing photographs of suspects in a cold case she is obsessed with solving, Rose realises she needs to find her sister before things get out of hand.

A missing girl. – With no sign of Willow to be found, Rose takes up the search for answers about the deaths that shook a small Cornish village eighteen years before. But what is the connection between Willow and the two sisters marked by tragedy?

Time is running out. – Someone knows where Willow is and what happened all those years ago. And they will do anything to stop the truth from coming out.

Can Rose find Willow and the answers she needs, before it’s too late? 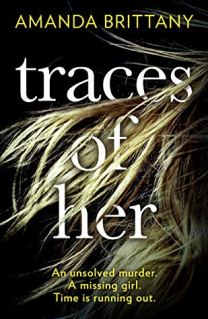 Willow is hot on the trail of her mother’s murderer. A young woman who was taken from her child in the most vicious way. Now her child is a grown woman and determined to get justice for herself and her poor mother. She calls her stepsister Rose to ask for her help and then mysteriously disappears. That leaves Rose with the job of finding a killer and her sister.

I thought the structure was a little convoluted at times, especially during the first half of the book. I found it a wee bit hard to follow the various characters, despite each chapter stating clearly which character was featured. It took a while to get the gist and where everybody belonged in the plot, perhaps too long. A complex plot doesn’t have to outsmart the reader, it just has to keep them hooked.

Saying that, it is certainly a captivating mystery and thriller, however the execution could have been better.

Brittany is certainly someone to keep an eye on when it comes to crime and psychological thrillers. Having read her other two books I know she has an eye for some wicked twists and intriguing storylines.

Buy Traces of Her at Amazon Uk or go to Goodreads for any other retailer. Publisher: HQ Digital; pub date 25 Oct. 2019. Buy at Amazon com.

Read my review of Tell the Truth by Amanda Brittany.

Read my review of Her Last Lie by Amanda Brittany. 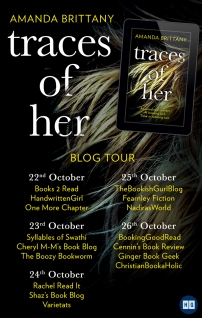 One thought on “#BlogTour Traces of Her by Amanda Brittany”