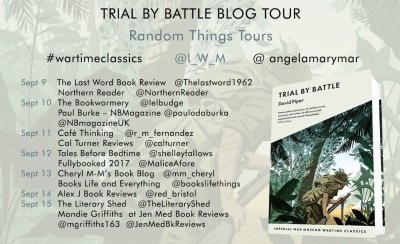 It’s an honour to take part in the BlogTour for Trial by Battle by David Piper. This is the second of four books being re-published by the Imperial War Museum.

Originally published to considerable acclaim, these titles were written either during or just after the Second World War and are currently out of print. Each novel is written directly from the author’s own experience and takes the reader right into the heart of the conflict. They all capture the awful absurdity of war and the trauma and chaos of battle as well as some of the fierce loyalties and black humour that can emerge in extraordinary circumstances.

Living through a time of great upheaval, as we are today, each wartime story brings the reality of war alive in a vivid and profoundly moving way and is a timely reminder of what the previous generations experienced.

The remarkable IWM Library has an outstanding literary collection and was an integral part of Imperial War Museums from its very beginnings. Alan Jeffreys, (Senior Curator, Second World War, Imperial War Museums) searched the library collection to come up with these four launch titles, all of which deserve a new and wider audience. He has written an introduction to each novel that sets them in context and gives the wider historical background and says, ‘Researching the Wartime Classics has been one of the most enjoyable projects I’ve worked on in my years at IWM. It’s been very exciting rediscovering these fantastic novels and helping to bring them to the wider readership they so deserve’.

Each story speaks strongly to IWM’s remit to tell the stories of those who experienced conflict first hand. They cover diverse fronts and topics – preparations for D-Day and the advance into Normandy; the war in Malaya; London during the Blitz and SOE operations in occupied Europe and each author – three men and a woman – all have fascinating back stories. These are Second World War novels about the truth of war written by those who were actually there. 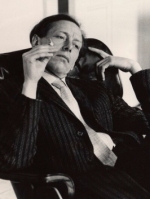 David Piper was best known as director of the National Portrait Gallery, the Fitzwilliam Museum in Cambridge and the Ashmolean Museum in Oxford. The novel is based on his time serving with the Indian Army in Malaya where he was captured by the Japanese and spent three years as a POW. His son, Tom Piper, was the designer of the hugely successful Blood Swept Lands and Seas of Red installation of ceramic poppies at the Tower of London to commemorate the First World War Centenary.

Buy Trial by Battle by David Piper at Amazon Uk

A quietly shattering and searingly authentic depiction of the claustrophobia of jungle warfare in Malaya described by William Boyd as ‘A tremendous rediscovery of a brilliant novel. Extremely well-written, its effects are both sophisticated and visceral. Remarkable’, and VS Naipaul as ‘one of the most absorbing and painful books about jungle warfare that I have read’ and by Frank Kermode as ‘probably the best English novel to come out of the Second World War.’ 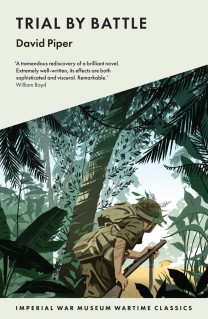 This is one of four books being released by the Imperial War Museum to mark the 80th anniversary of the outbreak of the Second World War. I believe they should be part of school curriculum – part of a learning experience for the younger generations. It’s hard for them to fathom how many people lost their lives, returned with life-changing injuries, so they can live their lives in freedom now.

When events like the Great War and the Second World War are so far back in history that the remaining few eye-witnesses will soon be a memory themselves – it’s important to remind the young of the lost generations and the trauma those involved went through.

Part and parcel of that is shining a spotlight on the literature that was written by authors who had first-hand experience of the hell that is war.

What makes this book and the fictional account of his factual experiences so exceptional is the way Piper captures a different kind of warfare in his story. Warfare in settings that the soldiers weren’t trained for – in this case the jungle. He captures the suffocating feel of the jungle. The feeling of isolation, which is countered by the danger you can’t see coming in the dense foliage. Soldiers trained for the desert had no idea how to cope with the jungle. It made them more vulnerable to the enemy.

At the same time Piper also gives an accurate account of the colonialism that was still alive and well in India at the time. The difficulties between Indian soldiers, Indian officers and the British officers sent in to control them all.

It’s a gripping piece of war fiction, written with brutal honesty and the kind of realism only an eye-witness can bring to the table.

Buy Trial by Battle at Amazon Uk or go to Goodreads for any other retailer. Imperial War Museum Wartime Classics will all be on sale Thursday 26 September 2019; cost £8.99 paperback.

About the Imperial War Museums – IWM

IWM (Imperial War Museums) tells the story of people who have lived, fought and died in conflicts involving Britain and the Commonwealth since the First World War.

‘Our unique collections, made up of the everyday and the exceptional, reveal stories of people, places, ideas and events. Using these, we tell vivid personal stories and create powerful physical experiences across our five museums that reflect the realities of war as both a destructive and creative force. We challenge people to look at conflict from different perspectives, enriching their understanding of the causes, course and consequences of war and its impact on people’s lives.

One thought on “#WartimeClassics #BlogTour Trial by Battle by David Piper”