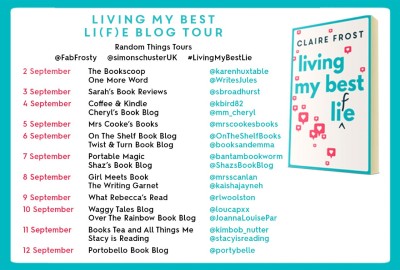 Today it’s my turn on the BlogTour Living My Best Life by Claire Frost. It’s women’s fiction, a contemporary read for all ages.

Claire Frost grew up in Manchester, the middle of three sisters. She always wanted to do a job that involved writing, so after studying Classics at Bristol University she started working in magazines. For the last 10 years she’s been at The Sun On Sunday’s Fabulous magazine, where she is Assistant Editor and also responsible for the title’s book reviews. She can mostly be found at her desk buried under a teetering TBR pile.

Bell never thought she’d be facing her 40th birthday single. Recently dumped by her boyfriend of ten years, she’s struggling to move on with her life – and surrender the fleecy pyjamas she’s been living in since January. Sick of being bombarded by #blessed on social media and feeling like her life doesn’t live up to everyone else’s, she decides it’s time for a change; time to find out who she really is, not who she thinks she should be.

Millie is a successful online influencer posting under the handle @mi_bestlife, but as a single mum trying to make ends meet and stay ahead of the younger generation snapping at her heels, her Instagram feed is far more #BestLie than #BestLife. With internet trolls attempting to bring her down and an ex who cares more about playing football than seeing their son, Millie begins to wish her life was more like her filters.

It isn’t until Millie and Bell’s paths cross that the two women begin to realise what they’re missing. Will Bell finally learn to live life for herself? And will Millie see that she needs to start living for the moment and not for the likes?

The Instagram life of Millie brings up some valid points. Social media influencers spend the majority of their time trying to convince others how perfect their lives are. Perfectly set-up pictures taken with the right filters, lighting, surroundings and objects. The focus is on perfection rather than reality.

Reminds me of a post that went viral of a young woman in sports gear posting that she is on a hike on *insert famous trail* – meanwhile her sister takes a picture of her stood in the backyard taking said picture.

In essence it is promoting fake pics of fake perfection to sell products. The problem with this is that reality gets harder to deal with because life can never be replicated in such a perfect way for the majority of us. Barring the upper echelon, and the rich and famous of course.

What Bell teaches Millie is that it’s okay to just be a single mother trying to raise her child in normal surroundings. It doesn’t have to look as if she lives the perfect life 24/7. In a way these two women empower each other to look beyond the expectations and rules of our patriarchal society. They have a lot in common, despite being a decade apart in age. They create a bond and a friendship that goes beyond shallow assumptions and misconceptions.

What I really enjoyed about this read was the way Frost focused on women helping other women, which is something society often sorely lacks. Instead we see a lot of criticism of women by other women.

It’s women’s fiction, a contemporary read for all ages.

2 thoughts on “#BlogTour Living My Best Life by Claire Frost”