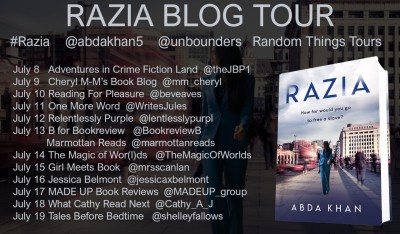 Today it’s my turn on the BlogTour Razia by Abda Khan. It’s a contemporary read with a modern crime, a heartfelt attempt to raise awareness. 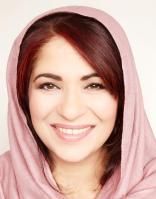 Abda Khan is an author and lawyer who works with victims of domestic violence. She was born in Bradford in 1969 to Pakistani parents, and she now lives and works in the West Midlands. He first novel Stained, was published in 2016, and described by Booklist as ‘a contemporary Tess of the d’ Urbervilles’. She was Highly Commend as a finalist at the 2017 NatWest Asian Woman of Achievement Awards, in the Arts and Culture category.

Farah is a young lawyer living and working in London. She’s just ended a long relationship, and her parents are looking for a husband – whether Farah wants one or not. So far, so normal. But at a work dinner, hosted by a dangerously powerful man, she comes across a young woman called Razia, who Farah soon realises is being kept as a domestic slave.

We follow Farah’s daring investigations from the law courts of London to the brick kilns of Lahore, as she begins to uncover the traps that keep generation after generation enslaved.Everywhere she turns there is deep-rooted oppression and corruption, and when the authorities finally intervene, their actions have dire consequences.

Farah teams up with a human rights lawyer, Alia and the two become close… but can she trust him: can they hep Razia and others like her: and will they ever discover the explosive secret behind these events. 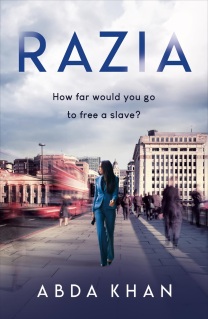 It’s such a bizarre and difficult thing for women of certain cultures, both religious and from an race and ethnicity perspective, to have to walk a tightrope between a modern life and cultural traditions.

Farah appears to walk through modern life with confidence, and yet as soon as she hears the beating of the biological clock she scarpers back to the haven of cultural traditions. It seems like such a contradiction, especially given the fact she isn’t exactly a shy wallflower. In her work and when she feels she has to step up to the mark, she does so with gusto and passion.

So the contradiction and clear imbalance is a woman who asks her parents to fix an arranged marriage for her and in the same breath she fights for the rights of a modern slave. Can she even see the hypocrisy of bowing down to an oppressive and patriarchal society, and trying to help the victim of the same society at the same time?

Aside from the modern slave angle, Khan also ventures into plenty of areas of oppression, maltreatment and sub-human treatment of women. She lays the cultural differences, and of course the religious ones, on a plate to be taken on board and observed.

Unfortunately modern-day slavery has become quite common in our era. Cheap labour forces who are coerced into working for nothing or ridiculous compensation, it isn’t a new type of crime, but it is a very lucrative one. Personally I think it’s the same as trafficking and should receive high punishments. It’s also not a crime bound by gender or age.

It’s a contemporary read with a modern crime, a heartfelt attempt to raise awareness.

Buy Razia by Abda Khan at Amazon UK or go to Goodreads for any other retailer. Publisher: Unbound; pub date 11 July 2019. Buy at Amazon com.