It’s Happy Publication Day for the third part in the Silent Sea Chronicles, The Sentinel’s Alliance by Suzanne Rogerson. It’s fantasy with a compelling plot and intriguing characters.

To celebrate publication day, all three books of the Silent Sea Chronicles series are 99p today! 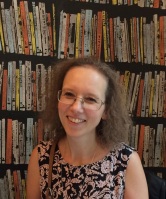 Suzanne lives in Middlesex, England with her hugely encouraging husband and two children.

She wrote her first novel at the age of twelve. She discovered the fantasy genre in her late teens and has never looked back. Giving up work to raise a family gave her the impetus to take her attempts at novel writing beyond the first draft, and she is lucky enough to have a husband who supports her dream – even if he does occasionally hint that she might think about getting a proper job one day.

Suzanne loves gardening and has a Hebe (shrub) fetish. She enjoys cooking with ingredients from the garden, and regularly feeds unsuspecting guests vegetable-based cakes.

She collects books, loves going for walks and picnics with the children and sharing with them her love of nature and photography.

Suzanne is interested in history and enjoys wandering around castles. But most of all she likes to escape with a great film, or soak in a hot bubble bath with an ice cream and a book. 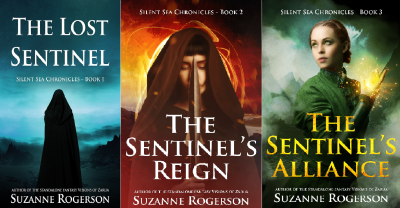 Can new alliances save the islands of the Silent Sea from the murderers stalking their shores?

As the island of Kalaya and its people recover from civil war, a new threat surfaces. Invaders from the island of Elkena hunt the seas, butchering those who possess magic. Their scar-faced captain seeks the Fire Mage who it has been foretold will kill him and Tei and her people are in his warpath.

Tei and a band of Kalayans travel to Stone Haven, the home of their new allies, planning to restore magic to the dead island. But the Stone Haven Council have abhorred magic since their people were massacred by Elkenan invaders twenty years before. Commander Farrell must persuade his people to accept magic again, but his plans expose them to their biggest fear and he risks leading Tei and her people into danger, and jeopardising the safety of both their islands.

Under Farrell’s guidance treaties are forged, but is the newly formed Silent Sea Alliance enough to defeat the invaders and stop their bloodthirsty quest to destroy magic forever?

The Sentinel’s Alliance is the final book in the Silent Sea Chronicles trilogy. 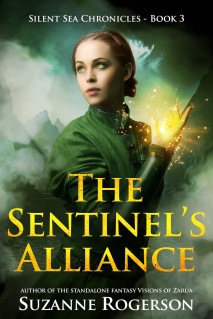 This is the third and final book in the Silent Sea Chronicles series. I recommend reading the other two books in the series to get the full background of the characters and the storyline.

In the first book the search is on for the new sentinel. In the second book the new sentinel has to prove their worth and establish themselves, which isn’t an easy thing to do, because the Elders like everything to stay the same. In this third book the users of magic have to trust they are making the right choice for their people. Hate seems to be everywhere and fear of magick threatens their lives once more.

It’s ironic that after all of the trials, deaths and tribulations Tei and her people have been through, they still aren’t safe. After bringing the hatred in Kalaya to a halt they now find they have become a target for the Stone Haven people. Their hatred, mistrust and fear of magick, makes them an even bigger threat to magick users.

Rogerson puts a focus on the relationships, especially the romantic ones and bonds of friendship. The problems Callisa and Tei have to deal with, whilst the adventure and battles continue all around them. Tei is finally able to allow her true feelings to flourish and Callisa realises it is quite lonely at the top.

At the heart of the series is a group of people who are trying to survive the oppression and annihilation of their people. Magick is considered dangerous and not trustworthy. The only thing the Sentinel and her people want is to live in peace and safety. The question is whether it is possible.

It’s fantasy with a compelling plot and intriguing characters. Rogerson threads an undercurrent of romance throughout the fantasy, which then invites readers of other genres in for a read.

Buy The Sentinel’s Alliance, book 3 of Silent Sea Chronicles at Amazon Uk or go to Goodreads for any other retailer. Buy at Amazon com.

Read my review of The Lost Sentinel and The Sentinel’s Reign.

2 thoughts on “#PublicationDayPush The Sentinel’s Alliance by Suzanne Rogerson”