Today it’s my turn on the BlogTour Island in the Sun by Janice Horton. It’s a pleasurable read, which is driven and made more captivating by the beautiful scenery the author evokes. 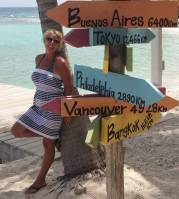 Janice Horton, also affectionately known as the backpacking housewife, writes contemporary romantic fiction with a dash of humour and a sense of adventure. Once her three children had grown up, Janice and her backpacking husband sold their empty nest in Scotland UK along with almost everything they owned and set off to travel the world. Since then they have been traveling full-time and have explored over 50 countries, living out of an apartment, a hut, or wherever they happen to find themselves.

Janice works as a writer wherever she is in the world. When not writing bestselling romantic adventure novels, she writes lifestyle and travel features for her website and her work has featured in national and international magazines like ‘Prima’ in the UK and ‘Friday’ in Dubai. She has also been involved in BBC Scotland’s Write Here Write Now project and has been interviewed on many podcasts and radio shows including Loose Women’s Kaye Adams’ prime time BBC Radio Scotland Show.

Buy Island in the Sun

When successful jewellery designer Isla Ashton unexpectedly inherits her eccentric Aunt Kate’s Caribbean island, she is obligated to return to the place she associates with heartache and regret. To where she grew up and fell in love with her childhood friend, Leo Fernandez. Fully intent on selling the island and finally putting the past behind her, Isla is soon compelled to put together the pieces of what really happened on a fateful night ten-years before. She begins to believe that in going to prison, Leo hadn’t only been shielding her from the same fate. She also starts to suspect that her late Aunt hadn’t been entirely honest in sending her away under the guise of recriminations. Who had they both been protecting and why?

Isla returns to the island of her childhood, Pearl Island, when her aunt dies and she inherits the entire island. (I think I need a relative like that too). It means she has to return to a place that caused her a lot of heartbreak. The island she was banned from after an awful mistake as a teenager.

Returning to a place that holds a lot of painful and also fantastic memories for Isla is both nostalgic and difficult at the same. It’s also the opening of a Pandora’s box, as Isla soon finds out.

It’s quite interesting how Isla reacts to the secrets and memories in Kate’s journals. As an objective reader Kate comes across as manipulative, ruthless and cold-hearted, and that is just in regards to her career and ambition.

Isla is very understanding and waves the more reckless and even criminal aspects of Kate’s behaviour aside. Yes, it’s the past and they are the words of a now deceased woman, but her reaction is perhaps also a reflection of how she regards her own behaviour.

It’s a pleasurable read, which is driven and made more captivating by the beautiful scenery the author evokes. In a way the island becomes a character in its own right, as the rest become the supporting cast.

On a side-note I have to agree with something the author says in the notes and acknowledgements. I was totally up for visiting the island and diving for pearls after reading this book. Unfortunately for me, and I can imagine quite a few other readers, it’s a fictional island and based on places and experiences from the author’s extensive travels.

Buy Island in the Sun at Amazon Uk or go to Goodreads for any other retailer. Publisher: Thornhill Print; pub date 4 Jan. 2019. Buy at Amazon com.