Today it’s more than a pleasure to take part in the BlogTour Bait, Grist and Security by Mike Hodges, the cult director of Get Carter and Flash Gordon. The stories have a gangster, old-school boys club vibe combined with shock-jock tactics. They shine a light on the corrupt cesspit of the world of influence and money.

Mike Hodges was born in Bristol, UK. As a television producer in the 1960s, he was invited to join the investigative programme World in Action. This took him to the US, covering the 1964 presidential election, and that same year to the war in Vietnam. He produced and sometimes directed the arts programmes Tempo and New Tempo . He is perhaps best-known for his work in cinema and television, including: Get Carter, Suspect, Rumour, The Manipulators, Pulp, The Terminal Man, Flash Gordon, A Prayer for the Dying, Morons from Outer Space, Florida Straits, Black Rainbow, Croupier, and I’ll Sleep When I’m Dead. He lives in London. This is his first book.

In ‘Bait’, a slippery PR man, Mark Miles, is unaware he’s being manipulated and dangled as bait by an investigative reporter until he’s swallowed by a sadistic mind-expanding cult from America.

In ‘Grist’, the bestselling writer, Maxwell Grist, ruthlessly uses real people as fodder for his crime novels before finding himself living up to his name and becoming grist for his ownmurder.

In ‘Security’, an American movie star, unhappy with the film he’s working on, refuses to leave his hotel for the studios, while in the corridor outside his luxury suite mayhem and murder take over. 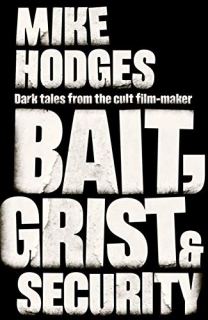 Bait, Grist and Security are three novellas written by cult director Mike Hodges. It is fair to say that all three stories are an attempt to reveal the worst traits of humans and the failings of society. I think the noir is so dark and dirty that it might be considered crud, either that or sent straight from the depraved bowels of hell.

As a director, Mike Hodges has given us film classics, such as Get Carter and Flash Gordon. I am not sure his writing translates as well as his spectacular talent at envisioning what a film should look like to viewers. Then again perhaps it is just a matter of perspective.

The stories have a gangster, old-school boys club vibe combined with shock-jock tactics. They shine a light on the corrupt cesspit of the world of influence and money. Everything is pretty and polished on the surface, but beneath the shallow exterior lurks something uncomfortable and dark.

The stories are also crude, sexually explicit and often teetering on the border of politically incorrect and absolutely socially unacceptable. The scene with the woman in the field is like something out of the Linda Lovelace (also known as Deep Throat) autobiography, except in her case the bestiality was done unto her by a canine. Then there is the occasional lean towards paedophilia.

It’s most certainly going to be a bit of a marmite read, as in not everyone’s cup of tea. Hodges plays with the dregs of humanity in a sardonic way, then mixes this tone within the constructs of the individual stories, and then lets them take their course.

Buy Bait, Grist and Security at Amazon Uk or go to Goodreads for any other retailer.

One thought on “#BlogTour Bait, Grist and Security by Mike Hodges”