Today it’s my turn on the BlogTour Playing with Death written by Simon Scarrow and Lee Francis. It’s my pleasure to bring this fantastic tour to a cracking end. The authors tackle quite a few questions of morality and humanity in this story about our society and the all-consuming technology our lives are now filled with.

A regular on the Sunday Times bestseller list with his historical novels, Simon Scarrow launches an exciting new strand to his writing with Playing with Death, written with Lee Francis: both an edge-of-your-seat thriller and a terrifying exploration of the dangers of the modern world.

Simon’s Eagles of the Empire novels are legendary amongst readers of historical fiction, and all his novels, have been acclaimed by reviewers and readers alike. Prior to writing fiction Simon worked as a teacher and lecturer; he is now a full-time writer.

Lee Francis worked for several years in the world of film, TV and advertising as a script reader and assistant director. Playing with Death, written with his former lecturer Simon Scarrow, is his first novel.

Haunted by a failed undercover mission, Rose is finding it hard to shake the memories of her close encounter with a ruthless serial killer – one who is still free, and could strike again without warning.

The call to investigate a suspected arson attack that’s left a man dead is a welcome distraction. It’s not the kind of case usually assigned to the FBI, but nothing about this crime is usual. As Rose digs deeper, she finds herself confronting the sort of imagination her son might see in the fantasy worlds of his video games.

But when your opponent is a killer, nothing feels like a game. . . 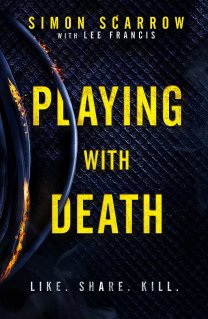 This book introduces the reader to a slightly different type of killer and crime-fighting duo. The main character finds herself targeted by the serial killer she inadvertently let escape, a kill and munch type of killer. After a period of respite he returns with new skills and a new platform he uses to prey on his unsuspecting victims.

In the middle of this book I found myself with a conundrum, specifically in relation to a conversation between Rose and Diva. I disagreed with Rose and agreed with Diva. First of all there is the question of whether it is morally correct to rape, torture, kill or treat virtual entities as inanimate objects, regardless of whether they are merely virtual concepts or AI’s.

If a person, leaving gender aside for a moment, is willing to abuse or kill in a virtual or online setting are they just one step away from committing the same act in a real life setting? Once those boundaries have been crossed in a virtual world the thrill of doing it to an actual human is only a question of time. The other side of the argument is whether we are approaching an attitude of punishing the thought process, before the actual deed or crime has been perpetrated.

The authors tackle quite a few questions of morality and humanity in this story about our society and the all-consuming technology our lives are now filled with. Instead of communicating with each other we are immersed in the world inside our gadgets. For the majority of us the world wide web is a way to connect and learn, for a smaller yet growing number it is the door to the fulfilment of any and all of their desires. The deep or dark web caters to the more criminally inclined and the deviants.

On a side note the whole Koenig does his own refurbishing (you’ll know what I mean when you read the book) was a wee bit implausible.

By the way don’t miss the Afterword by Simon Scarrow, it is enlightening to say the least, especially the part about the Artificial Intelligence, the experiment and of course Autonomous Intelligence. I am looking forward to seeing where Francis and Scarrow take this peculiar crime-solving duo. Diva doesn’t think the law applies to her and Rose doesn’t mind bending it a little to solve a case. It’s an innovative idea completely in keeping with advancements in technology and possible potential future threats to society and human life in general.

It’s certainly a thought provoking read, perhaps because it sails quite close to the truth in regards to online addictions, obsessions and technology.

Buy Playing with Death at Amazon Uk or go to Goodreads for any other retailer.

Error: Twitter did not respond. Please wait a few minutes and refresh this page.