It’s my pleasure to host the BlogTour for Game Show by Allie Cresswell today. This story is a sign of the times and it takes a frank look at human nature. It is brutal and unforgiving. 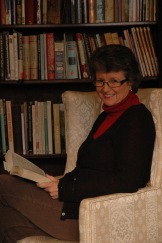 I have been writing stories since I could hold a pencil and by the time I was in Junior School I was writing copiously and sometimes almost legibly.

I did, however, manage a BA in English and Drama from Birmingham University and an MA in English from Queen Mary College, London. Marriage and motherhood put my writing career on hold for some years until 1992 when I began work on Game Show.

In the meantime I worked as a production manager for an educational publishing company, an educational resources copywriter, a bookkeeper for a small printing firm, and was the landlady of a country pub in Yorkshire, a small guest house in Cheshire and the proprietor of a group of boutique holiday cottages in Cumbria. Most recently I taught English Literature to Lifelong learners.

Nowadays I write as full time as three grandchildren, a husband, two Cockapoos and a large garden will permit.

It is 1992, and in a Bosnian town a small family cowers in their basement. The Serbian militia is coming – an assorted rabble of malcontents given authority by a uniform and inflamed by the idea that they’re owed something, big-time, and the Bosnians are going to pay. When they get to the town they will ransack the houses, round up the men and rape the women. Who’s to stop them? Who’s to accuse them? Who will be left, to tell the tale?

Meanwhile, in a nondescript northern UK town a group of contestants make their way to the TV studios to take part in a radical new Game Show. There’s money to be won, and fun to be had. They’ll be able to throw off their inhibitions and do what they want because they’ll all be in disguise and no-one will ever know.

In a disturbing denouement, war and game meld into each other as action and consequence are divided, the words ‘blame’ and ‘fault’ have no meaning and impunity reigns .

Game Show asks whether the situation which fostered the Bosnian war, the genocide in Rwanda, the rise of so-called Islamic State in Syria and the ethnic cleansing in Myanmar could ever happen in the West. The answer will shock you.

I adore the kind of premise that explores human nature. The contestants for this game show are a mixed bunch of individuals, so the choices they make and the reactions they have are bound to differ. A privileged wealthy housewife seeks the thrill, as opposed to the love deprived exhausted multiple mother on a tight budget, who may be willing to be more cut-throat to win the show.

At the beginning of the book the show is set to the topic of Native Americans. The scenes are bloodthirsty, wild and barbaric, so aside from the obvious cultural appropriation going on, there is also the aspect of depicting the stereotype and misconceptions of their culture. Very much a privileged white man’s idea of amusement, and another indicator of the ‘do anything for high ratings’ mentality of our era.

The West has already experienced the Holocaust, so the answer to the question in the blurb is yes it can happen in the West. In Western European countries the far right is sitting in governments once more, swastikas and hate crimes are in abundance. In the US the alt-right marches with Tiki torches.Today, at this moment in time, Western society is being forced into a similar scenario, a division between Muslims and non-Muslims, caused by the terrorism of fundamentalists and radicals.

Cresswell mentions the infamous Stanford Prison Experiment, as one of her inspirations to explore the psychology of human nature, and indeed confirm what the majority of us already know through history or perhaps even personal experience.

Given the right set of circumstances and motivation the majority of people will show the base animal instinct of human nature. Survival of the fittest, and above all power and control over others. A certain number of us will lose all inhibition and show ourselves capable of extreme violence and of inflicting pain upon those we perceive to be weaker and deserving of it.

The background of the story is set in the 1990’s to the background of the Bosnian conflict. At this point I have to say that despite constant reminders that we all never forget the atrocities of the Nazi regime, we are probably all guilty of ignoring the genocides that have taken place since then, the Bosnian War being a perfect example of that.

There is an interesting rant by Piers (producer) given in the first half of the book, when he more or less denies responsibility for any actions or events that place during the show, because in his eyes any person unable to recognise right from wrong has no moral fibre anyway. Thereby placing the blame solely in the hands of the single perpetrators. Now, don’t get me wrong they are to blame, but the person inciting them is just as culpable, actually more so.

Our television screens are awash with game shows and reality tv shows nowadays. Japanese game shows are a prime example of the balancing act between fun and bizarrely extreme behaviour. Participants are asked to act this way, they are primed and rewarded for it, and viewers lap it up. There is a market for it, and the boundaries are becoming less visible as the years go on.

There are two storylines in Game Show, both of which could survive as a standalone plot. Combined the juxtaposition of these two storylines makes the reader aware of the parallels in human behaviour in either situation. Simultaneously it also highlights the ludicrous and frankly abhorrent fact that while the rest of the world is engaged in mundane daily chores, somewhere else men, women and children are being slaughtered.

Cresswell doesn’t intend for this to be an easy read. Unfortunately it reminds us of the chaos and violence of human nature. How easily the masses are led, and how fragile our masks of civility are. Given the right set of circumstances the most docile human being can turn into a sadistic killer, and the most brash could possibly crumble at the first sign of adversity.

Game Show is about life within the confines of societal boundaries, and also when it is void of any boundaries at all. Is there really any difference between the two?

Buy Game Show at Amazon Uk or go to Goodreads for any other retailer.