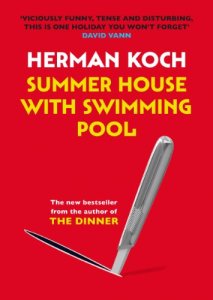 It takes a while to get where it is headed, but when the story actually gets to the point it is well worth the wait. Sort of like drinking an old single malt scotch, you can feel it wandering down your throat and when it hits the right place the burn shoots a rocket of signals into your taste buds.

Marc is the main character and the narrator of the story. He isn’t very likeable at all. In fact his view on being a general practitioner, how he secures his income and patients, what he actually really thinks about his job, well it is enough to put anyone off going to see their GP ever again.

He is quick to judge others, especially Ralph, which is completely ironic when you consider his own actions during the story. Glass houses and all that jazz.

The reader is led into the story with the accusation of medical malpractice on Marc’s part. It is however something far more sinister. Marc seeks vengeance for an unforgivable deed. A deed he believes was perpetrated by Ralph.

That moment between Marc and Ralph in the sitting room, after the event, when they both stop being just men and slide into the role of protective parents instead. That is when Ralph makes the mistake of victim blaming. You’ve seen your daughter you know what she is like. If she didn’t like it why didn’t she say so? The usual rubbish akin to it is her fault because she wore a short skirt.

I also have to say I was surprised, dismayed and just could not understand how both Marc and Caroline decided to deal with their daughters ordeal. Ignore, deny and sweep under the rug in the hope it will one day fade from memory. Regardless of what actually happened, this type of reaction only places a bigger burden on the victim. A blanket of silence, as a coping mechanism. Not really something anyone should teach their children.

The conversation between Marc an his old teacher was an eye opener from a purely moral point of view. Depending on the reasons he will condone the actions, which of course brings vigilantism into the picture. Do people with the power over life and death have a get out of jail free card when it comes to the medical boys club, especially if the error or the deed was committed, due to specific circumstances?

Koch certainly knows how to mix base emotion with controversial subjects. I enjoyed the way he does that.
I received a copy of this book courtesy of Atlantic Books and Edelweiss.